Chimpanzees are willing to socialise with robots, according to new research by the University of Portsmouth.

It is the first time that robots have been used to study behaviour in primates other than humans.

The study shows that chimps respond to even basic movements made by a robot, demonstrating that chimps want to communicate and interact with other ‘creatures’ on a social level. The researchers believe that these basic forms of communication in chimpanzees help to promote greater social bonding and lead to more complex forms of social interaction.

The research, published in Animal Cognition a few days ago, outlines how chimps responded to a human-like robot about the size of a doll. The chimps reacted to small movements made by the robot by inviting play, offering it toys and in one case even laughing at it. They also responded to being imitated by the robot.

The chimps did not appear to be put off by the primitive nature of the gestures but responded in the same way they might to humans or other chimps. 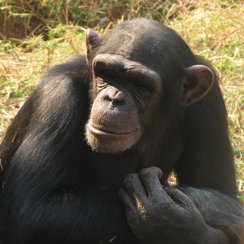 Lead researcher, Dr Marina Davila-Ross, is from the University’s Centre for Comparative and Evolutionary Psychology. She said that the advantage of using a robot in the study was that the chimps could be observed in a controlled but interactive setting while a human researcher was able to examine the chimps’ behaviour without needing to participate. This allowed the researchers to analyse simplest forms of ’social’ interactions.

“It was especially fascinating to see that the chimps recognised when they were being imitated by the robot because imitation helps to promote their social bonding. They showed less active interest when they saw the robot imitate a human.

“Some of the chimps gave the robot toys and other objects and demonstrated an active interest in communicating. This kind of behaviour helps to promote social interactions and friendships. But there were notable differences in how the chimps behaved. Some chimps, for instance, seemed not interested in interacting with the robot and turned away as soon as they saw it.

“In our other studies we have found that humans will also react to robots in ways which suggest a willingness to communicate, even though they know the robots are not real. It’s a demonstration of the basic human desire to communicate and it appears that chimpanzees share this readiness to communicate with others.”

The interactive robot was approximately 45 centimetres high and its head and limbs could move independently while chimpanzee sounds (such as chimpanzee laughter) were sent via a small loudspeaker in its chest area, which was covered by a dress. The chimps first observed a person interacting with the robot which was then turned around to face the chimp while the human researcher looked away to avoid any further communication.

Almost all of the 16 chimpanzees observed showed a level of active communication with the robot, such as gestures and expressions.

Dr Davila-Ross said that the research paves the way for further study using robots to interact with primates and discover more about their social behaviour in a controlled setting, such as how they make friends.