Portsmouth: Fire Destroys Lorry On A27 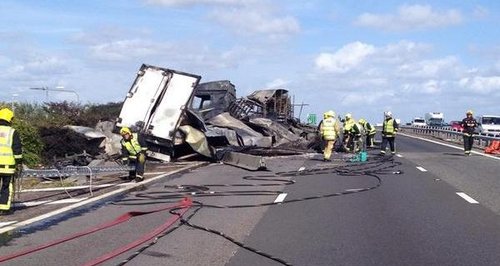 The A27 near Portsmouth has finally fully reopened, after a lorry fire caused long delays during yesterday evening's rush hour.

It jackknifed on the A27 eastbound above the Eastern Road turnoff just before 2pm yesterday afternoon (Tuesday 12 August) and burst into flames. It's thought the lorry was carrying refrigeration units.

The flames left the lorry completely burnt out, and at its height the fire caused black smoke to billow across the road.

The A27 was completely shut eastbound for several hours, but one lane later reopened.

The flyover section of the eastbound carriageway at Eastern Road was closed again to allow for extensive resurfacing work to take place overnight.

The section of road reopened just after 7am this morning.

Police say they understand that many people were stuck in traffic as a result of this incident, and have issued a statement to explain the operation they carried out alongside Hampshire Fire and Rescue Service and the Highways Agency today.

"The A27, and the Eastern Road roundabout was closed due to the intensity of the fire and debris flying from the vehicle from exploding tyres and flying sheets of metal.

"The roundabout underneath had to be closed due to proximity of the fire to bridge supports on the flyover and concerns that these may have been damaged by the fire. As soon as a structural engineer from the Highways Agency arrived and assessed the situation, the roundabout and slip road were able to be re-opened.

"As soon as the fire had been put out, and large sheets of metal from the lorry had been secured, we were able to open lane three of the main A27."

"These roads were closed for the safety of the public and were re-opened as soon as it was safe to do so.

"Fortunately no one was injured as a result of this incident. We appreciate people’s patience and understanding while we were dealing with this incident."