The head of a Portsmouth City Council panel has resigned over a row about an investigation into the Ashya King case.

Alistair Thompson claims an inquiry by the scrutiny panel is being blocked by the council's chief executive David Williams.

The council says the local Children's Safeguarding Board should lead an independent review, which a separate investigation 'could jeopardise'.

The parents of the five-year-old, from Southsea, faced a legal battle to get their child to Prague after removing Ashya from Southampton General Hospital on 28 August, with a High Court judge approving the move after they had been released from police custody in Spain.

Ashya was made a ward of court after the city council applied to the UK's High Court, leading to Brett and Naghmeh King's arrest. The order was later lifted and the Kings released from custody.

"It is inappropriate at this time for the council to hold its own investigation into the circumstances surrounding the Ashya King case.

"The statutory body, the Children's Safeguarding Board, is the appropriate independent and statutory body to undertake a full multi-agency review and any separate investigation at this stage could jeopardise this.

"The Children's Safeguarding Board has powers to make sure all organisations concerned take part in its review and it will assess the facts from an independent position. The council will help facilitate the review in any way possible and once it is complete councillors will be able to examine the situation through their own process if they choose to do so."

It is with sadness that I must resign as the scrutiny management panel chairman with immediate effect. My reason is very simple, David Williams. His refusal to call me or even email me personally about his moves to block a scrutiny review of the Ashya King case and PCC's handling of it.

Every time I have spoken to democratic services and instructed them to arrange a meeting, David reverses this request, but he fails to inform me or even provide an acceptable explanation. When we spoke to Michael Lawther at Brooklands he was clear that no review should start to the end of legal action, which has now concluded. There is therefore no reason in my mind why members of the SMP should not look at this, rather than be handed some sanitised report from the safeguarding board, which will almost certainly have parts redacted.

The role of scrutiny in the Council is far too important for it to be neutered by an empty vessel of a Chief Executive who only seems interested in shutting down debate and stopping members from fulfilling their  role as corporate parents - a role that Ofsted even criticised the Council for failing in. I also believe that the obfuscation risks politicising this tragic case and playing into the hand of our opponents who will/are using this to attack you and the Council. Worst of all allowing this issue to become political means there is a high probability that we lose sight of real issue, did PCC fail a desperately ill child and his family and if we did why and what lessons can we learn from our conduct.

While I personally believe that our officers correctly applied the law, but that the communications to members was lamentable, I can not as the head of Scrutiny test this theory, apparently because members of the SMP are not equipped with the skills or able to process the information in a way the Chief Exec believes is acceptable. This is both intolerable and undemocratic when a clear majority of the members of the panel want this process to commence. I also believe that the refusal to allow member a proper review lends weight to those who claim that the Council has something to hide.

It is always worth remembering that when David first started at the Council he talked about how he wanted the Council to be member led. This is something he clearly no longer believes in and his behaviour in this case has been disgraceful in so far as he has treated ordinary members like myself with contempt.

I think you are doing a brilliant job as Leader of the Council, righting many of the wrongs of the previous decade and bringing an energy and dynamism that the top of the Council has not seen for some time. Already your administration has achieved much and I hope that you will continue in this role for many years to come and I am sorry that I can't be there as part of the team. 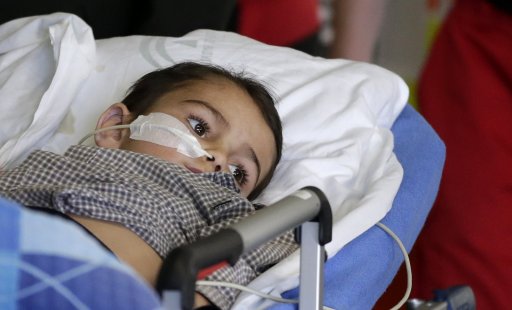 The Proton Therapy Centre (PTC) in Prague released a schedule for the youngster's treatment for a brain tumour, which saw him leave the University Hospital Motol and then undergo irradiation.

``There is a 70 to 80% survival rate for the condition such as Ashya has and there is now every reason to hope that he will make a full recovery.''

Ashya faces 30 visits to the PTC, with the first 13 focusing on the brain and spine, to ensure the tumour he had removed has not spread, and the remaining 17 to irradiate where the brain tumour once was.