New Forest Vet Fined Over Treatment Of Her Dogs 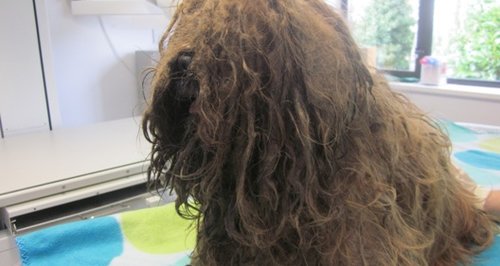 A practising vet from the New Forest's been fined almost £1,000 - after she previously pleaded guilty to failing to meet the welfare needs of her two dogs.

Kerstin Vockert, 56, of Ringwood Road, Sopley near Christchurch appeared at Bournemouth Magistrates’ Court on Thursday 28 May where she was fined £620 and ordered to pay a victim surcharge of £62 and costs of £300.

The court heard that cocker spaniel Millie and shih tzu Happy (pictured above, before and below, after care) were found in September 2014 with severely matted fur that was also caked in mud and faeces.  Happy was found wandering in the road late at night by passers-by who took him in. The dog warden was contacted and took the small dog to a vet and, despite Happy having no collar or tag, tracked down Ms Vockert.

The RSPCA was alerted and inspectors visited Ms Vockert’s address where they saw a number of other dogs, including a heavily matted cocker spaniel - Millie. When they returned the next day, Ms Vockert had put Millie to sleep.

Millie’s body was surrendered to the RSPCA.  Inspector Patrick Bailey said: “I have dealt with numerous matted dogs in my career with the RSPCA but I have never seen any as horrifically matted as Millie was.”

The court was told that Ms Vockert had already been given advice on the importance of regular grooming by the RSPCA in 2012 in relation to a heavily matted shih tzu.

In mitigation, personal circumstances as well as difficulty in grooming the dogs were cited.

“Both dogs had terribly matted fur which was covered in urine and faeces and Happy had to be completely shaved.

“Dogs cannot be left in this way - they would both have been in a huge amount of discomfort which could all have been avoided had they just received the care they needed.”

Happy had to have an eye removed as it was prolapsed when he was found.  He has been living with a foster family who are now planning to keep him permanently after he was officially signed over to the RSPCA by the court.

“Happy looks like a different dog now and has always enjoyed his grooming.  Despite being blind in his remaining eye, he has learnt his way around his new home and settled in perfectly.  I’m glad that he will now live up to his name in a great new home.”

The defendant pleaded guilty to, between 17 June and 17 September 2014, failing to meet the dogs’ needs to the extent required by good practice in that she failed to protect the dogs from suffering, injury, pain and disease by not adequately grooming them, contrary to s.9 of the Animal Welfare Act, 2006.

Strictly Come Dancing 2020: All The Big Changes To The New Series Due To Coronavirus