Two brothers from Lymington, who completed a 3,000 mile row across the Atlantic, are getting a heroes welcome.

Greg Bailey and Jude Massey spent 53 days at sea for their charity challenge, which finished in Barbados earlier this month.

They'll row up the river about 2.30 this afternoon, with a flotilla of boats, celebrating their success in rowing unsupported across the Atlantic Ocean. Jude is now the youngest person to have rowed any ocean as a pair.

The brothers have raised £93,000 for the British Skin Foundation to fund vital skin cancer research, and in memory of Jude's father (Greg's step-father) Pete Massey, who lost his 16 year battle with skin cancer two years ago.

The brothers will be arriving into Southampton on P&O Cruise's Britannia on the morning of 30 March. Their boat will be lowered in to the water and they will then be accompanied up the Solent by Azara Marine.

Boats wishing to follow the Ocean Brothers up the Lymington River need to muster out of the entrance to the river, east of the Starting Platform by 2pm, and are encouraged to bring flags and horns to wave and celebrate! While waiting, participating boats must keep clear of the navigation channel at all times.

The Ocean Brothers will start their row up the Lymington River at 2.30pm between the outbound and inbound ferries. They will row from the Royal Lymington Yacht Club area to Lymington Yacht Haven, where they will meet press, sponsors and other VIPs.

The best viewing will be along the sea wall, next to the slipway and around the edge of the Sea Water Baths. Another good spot to view them early on would be out on the seawall nearer the mouth of the river. 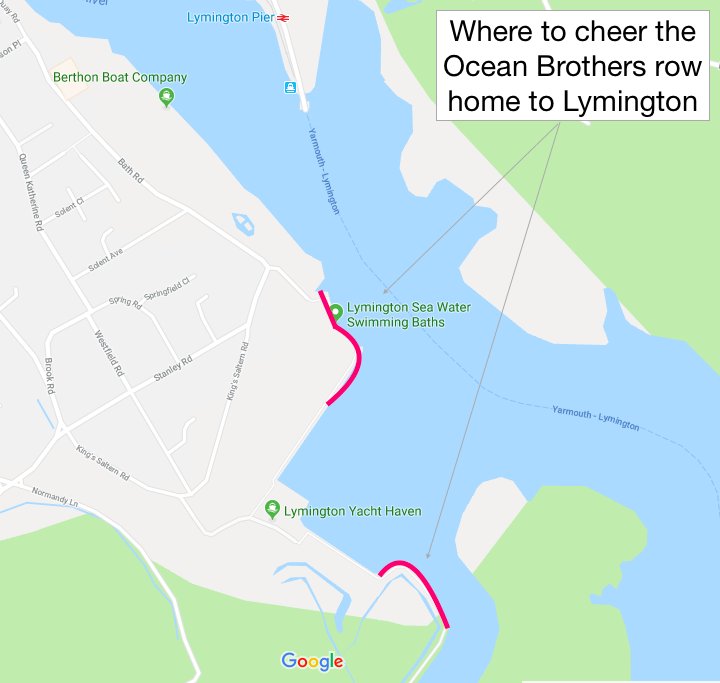