A Hampshire man who claimed to be a self-taught horse whisperer has been convicted of animal cruelty.

A pony treated by Jonathan Hurst was left with an eye injury and her tongue split open in Wherwell last year.

The 26-year-old from King's Elm in Barton Stacey was fined £300 and told to carry out unpaid work.

Hurst was sentenced on Thursday (26 January) at Basingstoke Magistrates' Court after being found guilty of two counts of causing unnecessary suffering to a pony called Tanzin, contrary to Section 4 of the Animal Welfare Act 2006, at an earlier trial.

Hurst had offered his services to Tanzin's owner after painting himself as a horse guru with experience training ponies.

Tanzin was taken to a yard in Longparish Road in Wherwell in Hampshire between 9 March 2016 and 14 March 2016 but after just a few days was left with significant injuries which were not treated by a vet.

RSPCA Inspector Jan Edwards, who described the gash in Tanzin's tongue as one of the most shocking she has ever seen, said:

"Tanzin had been left to suffer with absolutely shocking injuries. I have never seen anything like the state of her tongue. It's callous to leave an animal to suffer in this way without proper veterinary treatment.

"We were made aware of the untreated injuries after Tanzin's owner paid a visit to the yard for an update on her pony's progress. When she arrived she was surprised to find her pony didn't react to her as she usually would and screamed when Tanzin turned her head to reveal a greyed out eye as she feared Tanzin had been blinded.

"While she was being examined by a vet she had refused food which led to the checks in her mouth revealing the deep cut to her tongue." 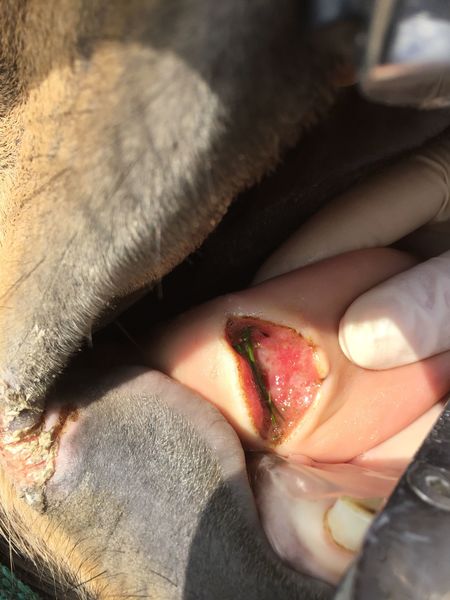 Hurst was ordered to carry out 120 hours of unpaid work and fined £300 with a £60 victim surcharge.