Teenager Out Of Hospital After Speedboat Crash Near Southampton 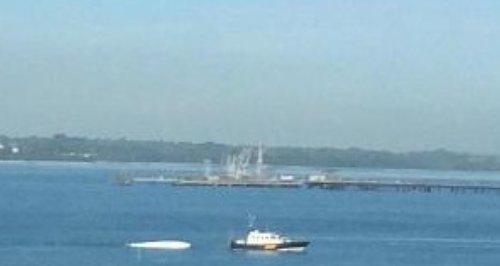 A teenager's been released from hospital after a powerboat hit a marker buoy and flipped over near Southampton.

Simon Dredge was on a test run in a prototype boat with his dad and two other men when it hit a buoy and flipped over a month ago, and sustained what were described as life-threatening injuries.

The powerboat company Vector World has confirmed he's now out of hospital, two weeks after saying he was expected to make a full recovery.

Just after 8am on Wednesday 13 May, the Coastguard received multiple 999 calls from members of the public reporting that a speedboat had crashed into a cardinal marker and capsized, just outside the Hamble River close to the Warsash Maritime Academy.

The speedboat had four men on board. Simon Dredge, in his late teens, suffered life-threatening head injuries and was rushed to hospital. His dad Peter and two other men suffered non life-threatening injuries. All four were taken to shore by lifeboat crews and taken to Southampton General Hospital by road ambulance.

Simon was rescued from the wreckage by his dad Peter.

Vector World said the vessel was on its first test run at the time.

Peter Dredge was a member of the British Powerboat Racing Club.

The Coastguard requested the Search and Rescue helicopter from Lee-on-Solent to the scene along with both RNLI lifeboats from Calshot. South Central Ambulance Service sent four ambulances, a hazardous area response team and the Thames Valley air ambulance to the scene.

The Police and the Marine Accident Investigation Branch have launched investigations.