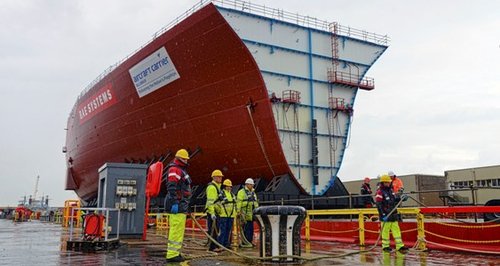 The last aircraft carrier section built in Portsmouth has left the city for Scotland.

A huge section of hull for HMS PRINCE OF WALES, the second Queen Elizabeth Class aircraft carrier, has today (Tuesday 26 August) begun its delivery voyage from HM Naval Base Portsmouth – the future home of the Queen Elizabeth Class. Workers gathered on board HMS Warrior to see it off.

BAE Systems is closing the yard by the end of this year.

“This is a significant milestone for the Queen Elizabeth Class aircraft carrier programme and a particularly proud one for the team in Portsmouth whose contribution to delivering the nation’s flagships has been outstanding.

“This 6,000 tonne section, known as Lower Block 02, is an incredible feat of engineering and its delivery marks the start of final assembly for the second ship. Once completed, we look forward to the Queen Elizabeth Class returning to their home port of Portsmouth.”

Lower Block 02 forms the distinctive forward hull section of the ship and houses cabins, machinery spaces, stores and switchboards. Standing over 20 metres high, 70 metres long and 40 metres wide, more than 8,000 pipes and 260,000 metres of cable have been installed on the block since construction started in February 2012.

In an operation lasting more than 10 hours, the aircraft carrier section was carefully loaded out of the hall in which it was constructed last week.  Eight trains of transporters, which together had more than 2,000 wheels, moved the section onto a barge ahead of its five day journey around the east coast of the UK to Rosyth. On arrival, the barge will submerge to allow Lower Block 02 to be floated off and maneovred into dry dock.

The departure of Lower Block 02 marks the completion of shipbuilding in Portsmouth, although BAE Systems remains a significant employer in the region, with around 3,800 people in the Solent area working in its Maritime Services business, as well as in the design, development and integration of combat systems and the Type 26 engineering design team.

A significant plan of investment is also underway to prepare HM Naval Base Portsmouth as the home port of the Queen Elizabeth Class aircraft carriers with HMS QUEEN ELIZABETH due to make her first arrival into the city in 2017. This includes dredging the approach and main channels inside the harbour, upgrades to navigational aids and the refurbishment of several jetties, along with wider infrastructure improvements.

The aircraft carriers HMS QUEEN ELIZABETH and HMS PRINCE OF WALES are being delivered by the Aircraft Carrier Alliance, a unique partnering relationship between BAE Systems, Thales UK, Babcock and the Ministry of Defence. BAE Systems has an overarching role in managing the Queen Elizabeth Class programme, as well as playing a central role in the design and build of the ships.

The Queen Elizabeth Class will be the centre piece of Britain’s military capability. Each 65,000 tonne aircraft carrier will provide the armed forces with a four acre military operating base which can be deployed worldwide. The vessels will be versatile enough to be used for operations ranging from supporting war efforts to providing humanitarian aid and disaster relief.