A 100-year-old woman's been given the freedom of the Isle of Wight - for her vital work delivering fighter planes in World War II.

Councillors overwhelmingly voted to give the honour to Mary Ellis, who is the world's last surviving known female member of the Second World War's Air Transport Auxiliary.

The extraordinary meeting of the Full Council bestowed the honour on the 100-year-old who delivered around 1,000 aircraft on her own - including Spitfires and Wellington Bombers - to the RAF equipped with only a compass, stopwatch and map to find the airfields.

Her dangerous work was vital to the war effort as she made sure squadrons were kept replenished with aircraft in the fight against Nazi Germany and she and her female colleagues were trailblazers for today's generation of women RAF pilots.

After the war, Mary went on to become Europe's first female air commandant. She managed the airport at Sandown on the Isle of Wight for 20 years, during which time she inspired women to learn to fly at the Isle of Wight Aero Club, which she founded. 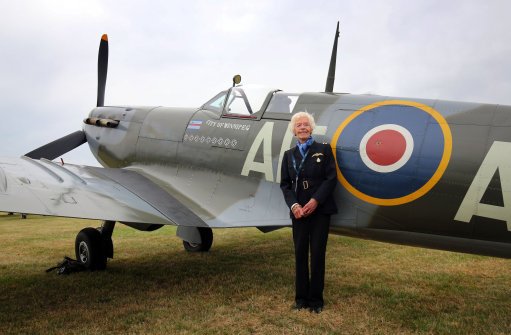 "Mary is a national, international and Island heroine and she is quite simply most deserving of the Honorary Freedom of the Isle of Wight," said Dave Stewart, the leader of the Isle of the council.

"I am sure I speak on behalf of the entire Island community when I say how proud we are of everything she has done for our country and the Isle of Wight. She is one of the last of the finest generation who did so much to guarantee our freedom 70 years ago."

"It is a privilege to present Mary with this honour, which is the highest distinction a council can give to an individual. She is an inspirational woman who is an example to us all."

On receiving the award, Mary said:

"I am very honoured to be given this award, although I have travelled extensively during my life, the Island has always been home and is such a special place to me. Thank you for granting me the Freedom of this wonderful Island.

"When I used to manage Sandown Airport we used to own sheep to keep the grass in check at the airfield. If only I'd been awarded the Freedom of the Isle of Wight sooner I'd have been able to legitimately herd my sheep down Newport High Street!"