A maritime pilot who joined Portsmouth Naval Base in the 1960s as a deck boy is preparing for the biggest day in his career - guiding in the giant aircraft carrier HMS Queen Elizabeth when she enters the city for the first time next year.

Tony Bannister, chief admiralty pilot at Portsmouth for the past 18 years, has just been appointed as dedicated pilot for the Queen Elizabeth Class carriers - the biggest ships ever built for the Royal Navy.

The 64-year-old from Havant will play a key role in bringing the 65,000-tonne Queen Elizabeth through the narrow entrance to Portsmouth Harbour early next year, working closely with the commanding officer and ship's bridge team.

Before then he will advise on the location of new navigational aids and ensure tug teams in the base are fully trained to manoeuvre HMS Queen Elizabeth and her sister ship HMS Prince of Wales in and out of the harbour.

"During my 18 years as chief admiralty pilot I had a great deal of fun, but the day when HMS Queen Elizabeth comes in for the first time will be the highlight of my career," said Tony, who joined the Naval Base in 1967 as a deck boy on tugs.

"Getting the ship through the narrow entrance and safely onto her berth will be a real challenge. We will have six tugs involved and the journey from Outer Spit Buoy in The Solent to the berth will take about an hour." 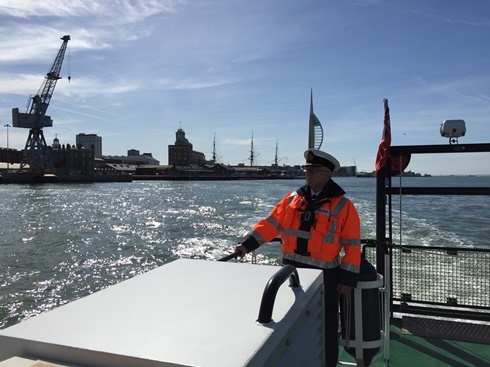 His preparation for the big day will also include several trips to Holland to use a specialist simulator which can mimic exactly guiding large ships in to port - in a range of weather and tidal conditions.

Tony's work will not stop once HMS Queen Elizabeth has arrived in Portsmouth. He plans to stay on at least until he's on the bridge of HMS Prince of Wales when the ship enters Portsmouth in 2018.