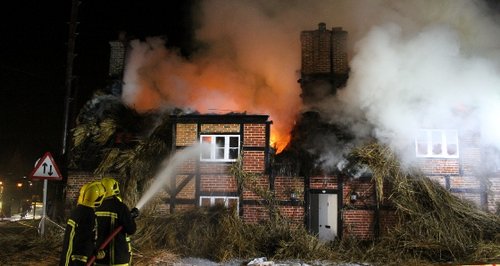 About 40 firefighters have battled a thatched roof fire on the edge of the New Forest.

Fire crews from Hampshire and Dorset were sent to Sopley near Bransgore yesterday evening (Thursday 12 February) at 17:41 after reports of a fire.

On arrival crews were faced with a large incident where a thatch roof was well alight. The firefighters quickly set to work tackling the intense fire.

Four Hampshire crews from the New Forest area were in attendance along with three crews from Dorset. Our aerial ladder platform was also sent to the scene.

Crew remained on scene throughout the night.

The cause of the fire is not yet known and an investigation will start this morning to establish what happened.