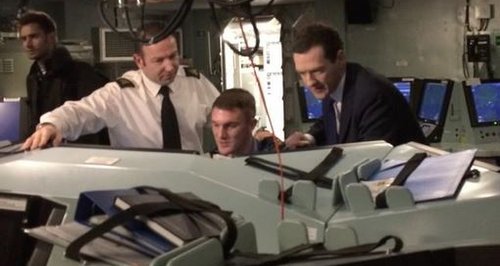 The Chancellor's visited Portsmouth, to announce a £100 million investment in the Naval Base.

George Osborne set out the government’s next steps in building the most modern navy in the world.

On a visit to the home of the Royal Navy, the Chancellor announced a new national shipbuilding strategy in advance of a decision later this year on orders for the brand new Type 26 Global Combat Ship. The Chancellor also announced that these multi-million pound ships will be based at the Navy bases in Portsmouth and Plymouth.

As part of the development of the national shipbuilding strategy, the Chancellor has asked to look at the potential to build a new complex warship every two years. As well as maximising export opportunities, this will ensure the Royal Navy continues to have the capability it needs to protect our nation’s interests, retaining its status as the most modern Navy in the world.

The strategy will help deliver world class ships for the Royal Navy while ensuring the best value-for-money for the taxpayer. It will also ensure that the Navy continues to have the capability it needs to protect our nation’s interests and ensure continued investment in UK warship production. It will help maintain jobs, provide new apprenticeships, and develop advanced engineering skills.

The announcement builds further on the government’s commitment to Defence and the Royal Navy. Today, the Royal Navy is being modernised with new equipment, ships and submarines; it is building two of the second largest new aircraft carriers in the world, which will operate the most sophisticated fighter aircraft ever produced.

It will receive the world leading new Type 26 frigate.  Two Astute Class submarines, the most advanced nuclear submarines in the world, have already deployed on operations and the UK is working to deliver a further five of the class over the next decade. Combined with the Type 45 Destroyer and four modern tankers to support the fleet at sea, as well as the forthcoming renewal of Trident, this means the Royal Navy of today is being equipped for the challenges of the 21st century.

While on the visit to one of the world’s oldest dry docks, the Chancellor also announced almost £100m of infrastructure development in new dock facilities at Portsmouth Naval Base to further support the arrival of the Queen Elizabeth Class Aircraft Carriers.

The new work will encompass berthing and jetty improvements, new power supply and distribution, and significant dredging in the approach to the harbour to enable the base to accommodate the largest warships ever built for the Royal Navy.

The move will provide significant employment opportunities in the Portsmouth area over the next Parliament.

“Ensuring a better and more secure future for Britain means equipping our Royal Navy for the challenges of the 21st century.  It is only because we have a long term economic plan that we able to invest in our national security.”

“Our ambition is to deliver the most modern Navy in the world which this Government believes is a national necessity. It will maintain and create jobs and deliver a more secure future for Britain.”

Responding on behalf of the Royal Navy, the First Sea Lord said:

“I am delighted by the Chancellor’s announcement today. The commitment to a new national shipbuilding strategy is not just a very significant investment in the UK’s shipbuilding future.

"It is also a powerful statement that our nation’s global interests will be protected by a credible, world class Navy – equipped with fast-jet aircraft carriers, submarines, destroyers and frigates which will be the best and most modern in the world.”

The Chancellor also announced £3 million for causes which support the families of the Royal Navy alongside projects which showcase Naval history.

Funding was announced as the Chancellor paid a visit to the Royal Navy Docks in Portsmouth as he confirmed that the money would come from the fines levied on banks for manipulating the London Interbank Offered Rate (LIBOR) financial benchmark.

The projects set to benefit from the funding announced today include:

·       £1 million for the Royal Navy and Royal Marines Charity to support Royal Navy personnel and their families in Portsmouth through projects including refurbishing the Warrant Officers Mess in HMS Sultan and renovating Navy Mews to provide flats so families can spend time with their loved ones in Portsmouth if they are deploying.

·       £1 million for the Royal Navy and Royal Marines Charity to enable support for a number of projects including help for the Naval Families Federation.

·       £1 million to support the Royal Navy Museum and the Royal Navy Heritage Flying Trust (RNHF) to deliver historical projects and attract tourism to Portsmouth. The funding will go towards restoring the LCT 7074 (World War II landing Craft) and to fund essential long term repairs to the Swordfish historic flight – the first Carrier borne aircraft for the Royal Navy.

“It is fitting that the money paid in fines by people who demonstrated the poorest values in our society is used to support those who demonstrate the very best.  Servicemen sacrifice so much to keep our nation safe and we will invest £3 million investment into projects such as refurbishing the Mess at HMS Sultan and renovating the Navy Mews so they can spend times with their loved ones when they are deploying.

“The money will also go towards supporting the Royal Navy Museum and the Royal Navy Heritage Flying Trust so that future generations will always know the stories of the sacrifices made by our hardworking servicemen and their families.”

Today’s announcement follows the Chancellor’s pledge in December last year that all proceeds from LIBOR fines would be spent during their parliament on military and blue light causes.

So far, funding has been awarded to a range of projects from the Invictus Games to mental health support for ambulance, police and fire services.