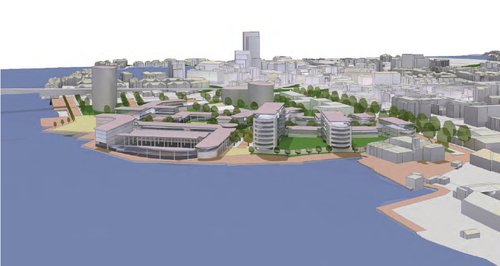 Plans to create for a new waterside development at Southampton's old Town Depot, with around 350 homes, have been revealed.

The City Council says the Chapel Riverside site, close to St Mary's Stadium, would also create hundreds of jobs. A public consultation's expected next year and if agreed, work could start in 2017.

Inland Homes’ proposal creates an enticing new neighbourhood with generous green spaces and an extension of the Riverfront Walk, which integrate the area with the wider locale.  The proposals show a scheme with several apartment buildings, overlooking the water, at varying heights and framed by green space.  The scheme will be delivered in a number of phases.

Chapel Riverside forms part of the wider Itchen Riverside, one of the largest VIP projects identified within the council’s City Centre Master Plan, and could provide up to seven per cent of the plan’s total new homes delivery target of 5,000, by 2026 for the city.

“The plans for the site are very exciting.  The development of Chapel Riverside will help to connect this area of the city and form the catalyst for wider development of the Itchen Riverside, as per our City Centre Master Plan’s vision for the city.  I look forward to seeing the designs and ideas for the site in 2015.”

It is expected that a public consultation of the initial designs and plans for the site will take place in 2015, with a planning application submitted in 2016.  Work could start on site in early 2017.

"We are delighted to have been chosen by the City Council to regenerate Chapel Riverside and we are confident that we can deliver an exemplary development that will benefit the whole community.  The Itchen Riverside regeneration area has incredible potential and our two developments – Meridian Gardens and Chapel Riverside – will transform the area and provide a catalyst for the future development of other sites."

The water tanks and pump house that form part of the site, will be contained and incorporated into the landscape.  The sea wall will see repairs and land will be raised to alleviate flooding.  The development will also enhance the setting around American Wharf, sensitively and in accordance and consultation with English Heritage conditions for Grade II listed buildings.

The new neighbourhood will join this somewhat disparate area of the city, dovetailing well into the existing cityscape, to extend and enhance the west bank of the Itchen.  Residents will be within easy reach of the city centre, Ocean Village, St Marys Stadium and Woolston, via the Itchen Bridge.

Other nearby sites are being investigated as potential developments for the future, to further enhance the area and bring forward more much needed housing and business premises.