The body of a woman was found by police and coastguards off the coast of Marsden in South Shields.

The body hasn't been formally identified, but it is believed to be that of Pauline Whitfield.

Pauline has not been seen since around 9.30pm on Thursday evening (29th Aug).

She left her home address earlier that evening however didn't return home after going to the Mecca Bingo in South Shields.

The CCTV image shows her in the bingo hall on Thursday evening. 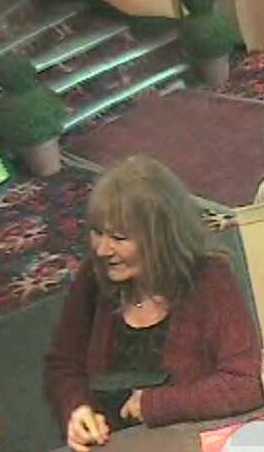 Officers are also keen for a woman who is believed to have spoken to Pauline at the bus stop to get in contact.

The woman was wearing what appeared to be a stripy jacket and dark trousers, possibly jeans and was with a young girl who was wearing pink jeans.

Pauline is described as white, five ft 1 inches tall, medium build, shoulder length strawberry blonde hair, green eyes, pale complexion with a mole on the right side of her face.

he was last seen wearing a black t-shirt, a dark purple cardigan, black trousers and had a black shoulder bag.