Newcastle Airport along with BMI Regional have announced a new route from Newcastle to Brussels.

The planes have 49 seats and will fly twice daily between the two cities.

Newcastle Airport's Planning and Corporate Affairs Director Graeme Mason told Capital:
"We think this is a very important route for the region from the point of view of Brussels being a very important city.

All of the EU functions are in Brussels, along with the members of the European Parliament.

It isn't aimed completely at business though.

There is an opportunity for leisure too, both with people from Belgium coming to our region and for anyone who wants to go and experience Brussels and Bruges and everything else Belgium has to offer.'

As the first flight touched down on Newcastle Airport's tarmac it was greeted by a water cannon guard of honour (see a video below), before the passengers got off and made their way into the terminal. 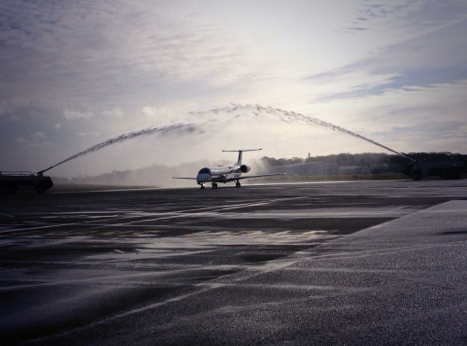 Speaking at the launch of the new route at Newcastle Airport, BMI Regional's Chief Executive Cathal O’Connell told Capital:
"We're delighted to re-introduce the service between Newcastle and Brussels.

It's an important route because it connects Newcastle with Brussels and beyond.

So it's important for business and leisure.

It's targeted at business people with flights each day in the morning and evening, but it's also very convenient for leisure travellers as well."
See the video of the water cannon guard of honour that was put on as the flight landed from Brussels at Newcastle Airport below