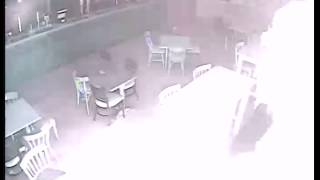 Police in Newcastle have released CCTV footage of the moment a pub was set ablaze by arsonists.

At 1:05am on Sunday, January 22, two men smashed an outside window in the bar area of the Jubilee Public House and poured an flammable liquid inside.

They then set fire to the liquid causing the pub to catch fire.

The landlord of the pub and his family, including young children, were upstairs at the time of the incident but they managed to escape the unharmed.

The fire was brought under control and put out by fire services but caused substantial damage to the pub.

Newcastle Inspector Julie Rana said: "This was incredibly dangerous and people could have easily been killed. There were people, including young children, inside the pub asleep at the time this happened and you can see from the footage just how quickly and violently the fire was - it is a miracle no one was hurt.

"A full investigation is being carried out to find those responsible and we are checking CCTV in the area for any suspicious cars or people. We are speaking with local residents and if anyone thinks they have any information that could help then please speak to us as soon as possible."