A football fan who punched a police horse after Newcastle lost to Sunderland in the Tyne Wear derby has been jailed.

45 year old Barry Rogerson, was charged after trouble flared when Newcastle United lost 3-0 at home to Sunderland in April.

Newcastle Crown Court heard that during sustained disorder across the city, Rogerson had remained close to a mounted police line in the city.

He was drunk and began to clap in a horse's face, before squaring up to one of the animals and punching it in the head.

Sentencing Rogerson to 12 months in prison for violent disorder, Judge Paul Sloan QC said:
"You attended the football match and by the time it ended you were much the worse for drink.

You had taken it in conjunction with prescription medicine knowing you should not have done so.

The crowd surged forward on two occasions and after the first surge you walked amongst the horses clapping your hands in excitement or pleasure at the events.

Someone tried to pull you away but you pushed him away.

A horse started to move towards you and you were told to move back, you had plenty of opportunities to move away.

You stood your ground and attacked the horse by punching it in the head.

There was a risk of serious injury, the officer could easily have been thrown from the horse and could have sustained serious injury.''

Rogerson (pictured right), of the Hartlands area of Bedlington was also banned from attending any football matches in the UK for six years. 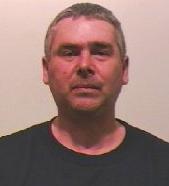 He was photographed with a scarf over his face punching Bud, a horse working for West Yorkshire Police (pictured above).

Sentencing a number of other offenders too, Judge Sloan said:
"When offences of this kind are committed by large groups, sentence should include an element of deterrent so those who may be tempted to take part in sustained public disorder know that a significant sentence will be imposed.''