Detectives investigating the murder of Tipu Sultan in South Shields say they've found a motorbike they think was used by whoever shot the dad of two.

Two men on a motorbike were seen driving into the rear lane in Lake Avenue just before the incident and seen driving away immediately after the shooting.

Officers believe that these two men were responsible for the murder of Tipu Sultan and enquiries are underway to identify and locate them.

Parts of the bike were found burnt out in a field near to East house Farm, just off Follingsby lane in Washington.

The parts were recovered by officers and have been examined forensically.

Police are now trying to track down a silver Ford Focus seen in the area of Lake Avenue on the night of the shooting.

Police investigating the murder of Tipu Sultan are continuing to appeal for information, a month after he was killed.

At just before 9:58pm on Tuesday, April 7th, Tipu Sultan was approached by a man armed with a gun and shot from close range at the rear of the Herbs n Spice Kitchen takeaway in Lake Avenue in South Shields.

Two men on a motorbike were seen driving into the rear lane in Lake Avenue just before the incident and seen driving away immediately after the shooting.

Officers believe that these two men were responsible for the murder of Tipu Sultan and enquiries are underway to identify and locate them.

Since the investigation was launched officers have seized over 2,000 hours of CCTV footage from the area where the shooting happened.

Over 1,000 homes have been visited by officers carrying out house to house enquiries and 225 statements have been taken.

The incident room has received in excess of 100 phonecalls, emails, web submissions and letters from members of the public passing on information.

A 35-year-old man was arrested on April 12th and he has been bailed pending further enquiries.

Anyone with any information that could help with enquiries is asked to contact police as soon as possible on 101 ext 69191 quoting reference number 1255 07/04/15.

Information can be passed anonymously by ringing Crimestoppers on 0800 555 111.

Around a thousand people turned out to say a final goodbye to Tipu Sultan, who was shot dead in South Shields.

Large crowds gathered at the Sunderland Bangladeshi Community Centre to pay their respects to the dad-of-two, who was killed outside his takeaway shop on Lake Avenue two weeks ago.

Tipu's brother Mahsum had to be consoled by friends as he left the centre and made his way, with the rest of the family, to a private burial. 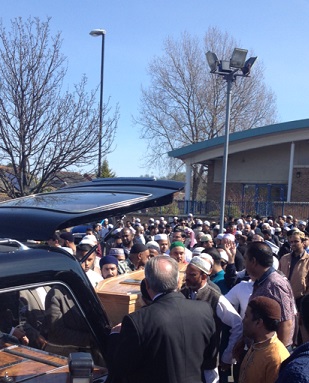 Northumbria Police are still trying to work out a motive for his murder, which has left the community in shock.

Detectives investigating the 32 year old's killing still want to trace two men who were seen leaving the scene on a red motorbike.

They also urge anyone who has information about the bike to come forward.

Police investigating the murder of a dad-of-two from South Shields say they have found no motive for the killing and that the victim had no known enemies.

His brother Mahsum Sultan told a news conference he could not think of a reason why anyone would want to harm him.

"This is something I think of every day... One word I would have for my brother is 'amazing'. He did everything for everyone. He was honestly unselfish. I wouldn't know why anyone would want to harm him in any way."

Police have ruled out robbery and believe there was no racist motive.

Tipu Sultan was married to Julie, lived in Sunderland, and was the proud father of a seven-year-old boy and a two-year-old girl.

His brother said: "Both children adored their father. They would often sit at the window waiting for him to arrive home from work. They were always so excited to see him."

The takeaway owner's widow was "devastated", the news conference was told. Mahsum Sultan said telling his nephew and niece what had happened was the worst thing he had encountered.

Detective Chief Inspector John Bent said more than 100 officers have been working on the case.

He urged the public to study CCTV pictures of two men leaving the area on the distinctive red motorbike, and asked them to think if they had seen it previously. 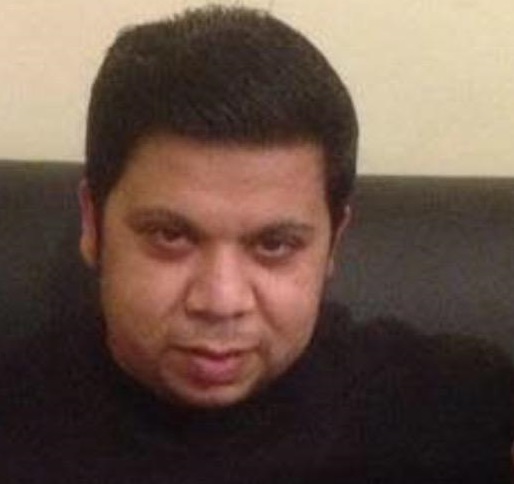 CCTV footage taken from Lumley Avenue and Lake Avenue, which can be seen below,  show the motorbike at around 9:58pm on Tuesday April 7th, moments after Tipu Sultan was shot and killed.

The bike left Lake Avenue, headed onto Lizard Lane before leaving the area towards Whitburn and Sunderland.

The bike is thought to be a large, red, superbike or performance style bike and police are still trying locate it.

Anyone who thinks they recognise the bike or has any information as to its whereabouts is asked to contact police as soon as possible.

On Sunday, April 12th, a 35-year-old Newcastle man was arrested in connection with the murder.

He has since been bailed pending further enquiries.

As part of the investigation, searches have been carried out in Lizard Lane, Whitburn Golf Club and two premises in Netherton Avenue and Spence Terrace in North Tyneside.

A man arrested on suspicion of conspiracy to murder in connection with the fatal shooting of Tipu Sultan has been released on bail.

32 year old Tipu Sultan, was found at the back of the Herbs n Spice Kitchen in Lake Avenue, South Shields, on Tuesday.

Two men were seen riding a red motorbike away from the street straight after the shooting.

Northumbria Police said a 35-year-old Newcastle man had been arrested on suspicion of conspiracy to murder and remained in custody.

CCTV images of the two men have been released and police teams have searched a number of locations.

Mr Tipu received a single gunshot wound and after arriving paramedics attempted to treat him but he was declared dead at the scene.

Detectives are continuing to urge anyone with any information that could help with inquiries to contact them.

Detectives have released CCTV images of two men on a motorbike speeding away from a takeaway moments after its owner was shot dead in a pre-planned attack.

Tipu Sultan, 32, was blasted with a shotgun at close range at the back of the Herbs n Spice Kitchen takeaway in Lake Avenue, South Shields, Tyneside just before 10pm on Tuesday. 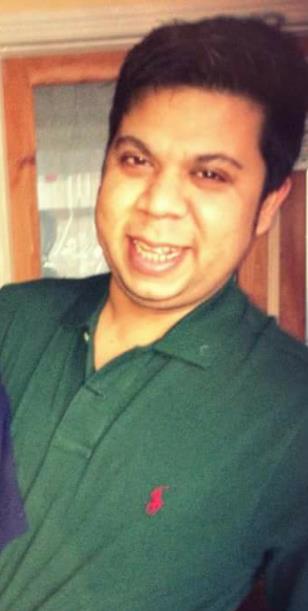 He died as result of single gunshot wound. Northumbria Police has released CCTV(below) of two men detectives suspect to be the murderers who were seen driving a motorbike into the rear lane then riding off.

It was taken in the minutes after Tipu Sultan was shot and we believe that this is the two men who are responsible for his murder leaving the scene. From the footage you can clearly see the two men on the bike, both are wearing helmets.

From the footage we can gauge the size and shape of the motorcycle - which we believe is a large, red, superbike or performance style bike.

We need to speak to anyone who saw these men and this bike before or after the incident."

If anyone was driving on Lizard Lane around 10pm on Tuesday, April 7, and who saw or passed the motorbike - that might well have been driving at a very fast speed - then I'd urge them to contact police with any information that they have, as soon as possible."

Our thoughts continue to be with Tipu's family at this time and I want to reassure them, and the wider public, that we are doing all we can to try and identify those responsible for Tipu's murder.''

Anyone with any information that could help with enquiries is asked to contact police as soon as possible on 101 ext 69191 quoting reference number 1255 07/04/15. Information can be passed anonymously by ringing Crimestoppers on 0800 555 111.

Officers have confirmed the man who was shot dead in South Shields last night was 32-year-old Tipu Sultan.

Police say they believe two men on a motorbike were involved in the shooting of the dad of two, who was from Sunderland, but originally from Bangladesh.

Witnesses saw two men, wearing crash helmets and dressed in dark clothing, drive into the rear lane of Lake Avenue on a motorbike just before the shooting.

They were then seen driving away from the area in the direction of Lizard Lane immediately after the shooting.

A spokesperson from Northumbria Police said:
"Anyone who saw the motorbike in the area around the time of the murder is asked to contact police with any information.

There is cordon in place at the scene and the area remains closed to the public while enquiries are carried out.

Extra officers are carrying out reassurance patrols in the area speaking to local residents and businesses."

The victim has been named locally as Tipu Sultan, of Sunderland.

He is said to have had two young children, a boy and a girl.

Victoria Chisholm's the landlady at the nearby Lake pub.

She's told Heart Tipu was 'one of life's true gents.' 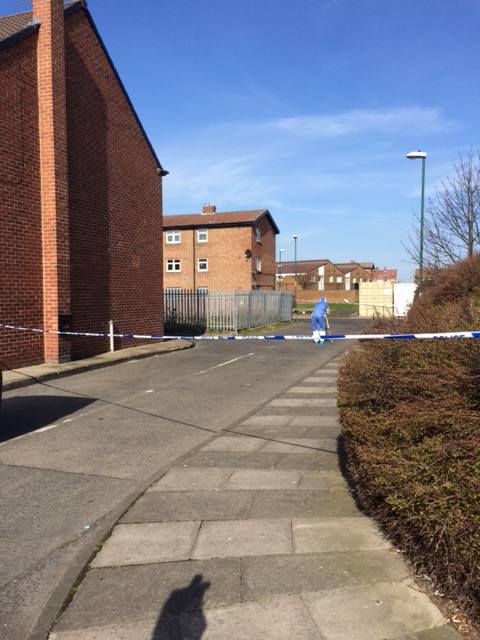 PICTURED: The scene on Lake Avenue, South Shields this morning

A man has been shot dead outside a takeaway in South Shields.

He was found with a gunshot wound in a lane behind the Herbs n Spice Kitchen Indian restaurant in Lake Avenue, South Shields, at 9.58pm yesterday.

Paramedics attempted to treat him but he was declared dead at the scene and police cordoned off the area while they investigated. A spokesman for Northumbria Police said inquiries were continuing.

Officers have been sent to the area to provide reassurance, the spokesman said.