Taxi drivers in Hartlepool have been sent letters warning them not to accept 'sexual favours' from their passengers.

The warning comes after a cabbie had his license taken off him when he was caught having sex in the back of his car as he dropped the girl off outside her home in Hartlepool.

The letters, from the council's Principal Trading Standards & Licensing Officer were sent out last month.

In them, taxi drivers are reminded 'that any sexual contact with a passenger is unacceptable and is likely to result in the revocation of their licence.'

In a statement Hartlepool Council say:
"We can confirm that a taxi driver has had his licence revoked after admitting having sex in his vehicle.

Hartlepool Council expects the highest possible standards from taxi drivers and they have a vital role in protecting the public whilst carrying out their work. We have written to all taxi drivers in the town to inform them that we will not tolerate such behaviour and any sexual contact with a passenger is likely to result in their licence being revoked.” 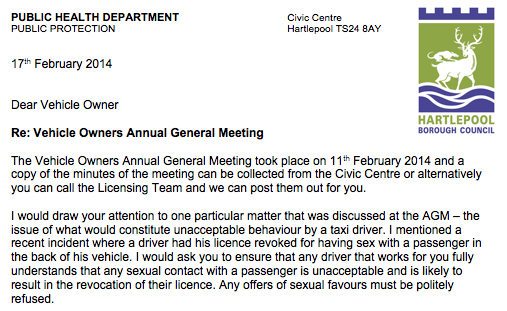