Homeland star Damian Lewis has dropped by Newcastle Uni's Robinson Library to research a character in an upcoming film.

He's playing opposite Nicole Kidman as the lover of Gertrude Bell in director Werner Herzog's Queen Of The Desert, due for release next year.

Bell was a British traveller, writer, diplomat and spy in the Middle East in the early 20th century.

Included are letters to and from his character, Major Charles Doughty-Wylie, a married man who had an unconsummated affair with Bell.

News of Monday's visit emerged on Thursday when the university posted a photo on its Twitter feed of Lewis posing with a librarian. 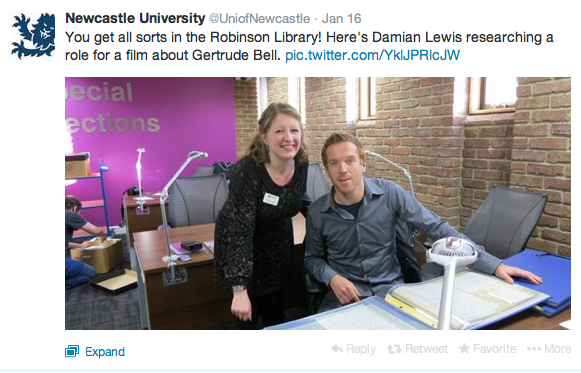 Heart-throb Robert Pattinson will also appear in the film as Lawrence of Arabia.

Bell was born into a family of wealthy industrialists and lived in Washington New Hall in what was then County Durham.