Police investigating the violent murder of a Salford mum-of-two are hoping an appeal on TV's Crimewatch will help trace the man suspected of killing her.

Michael Cope has been on the run for more than three weeks after former partner Linzi Ashton was found strangled and beaten to death at her home in on Westbourne Road, Winton.

So far the 28-year-old has evaded capture, despite being spotted withdrawing cash and buying food from a shop in Hindley, Wigan.

Greater Manchester Police have in recent days used the force helicopter in their attempt to trace Cope, who they are describing as dangerous.

Officers believe he may be using the pathways around the Bridgewater Canal and sleeping rough.

Below is the most recent sighting, a CCTV image of Cope shopping in Hindley on Sunday 14th July.

The Crimewatch appeal will be tonight (Thursday 25th July) at 9pm. 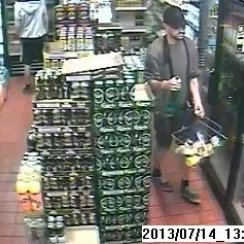