A Nottingham Labour Councillor has been suspended for sharing a parody of an election poster changed to include an image of a Nazi death camp.

Rosemary Healy, who represents the Mapperley ward on Nottingham City Council, insisted she had not spotted what the picture was of when she retweeted it to more than 1,500 followers.

She deleted it and apologised straight away. tweeting:

'Profound apologies for that retweet which was a genuine mistake and would never have been retweeted had I recognised it for what it was.'

The original post shared by Ms Healy was an altered version of a Tory poster.

The poster originally showed a road in the UK but the retweeted one had been changed to show railway lines leading into the Auschwitz camp where more than a million people died during the Second World War.

'This trivialises the horrors of the holocaust and I think Councillor Healy and her party should be ashamed.' 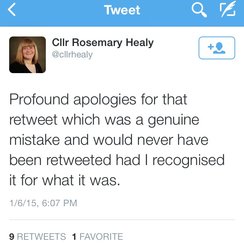