Up to seven people are day are using a site to give feedback to Leicestershire Police about their performance.

The system's been live for a month and in that time 30% of people have given the force a 5 star rating but some people aren't happy about the levels of anti-social behaviour.

The force is the first to use the TripAdvisor style system in the while of the UK and officers have told Capital that other forces are keen to use it too.

The five-star system gives people the chance to give direct performance feedback to officers and leave comments.

The force put the page together to 'enhance public confidence' and 'help identify any areas for improvement', saying the system is for feedback not making formal complaints. 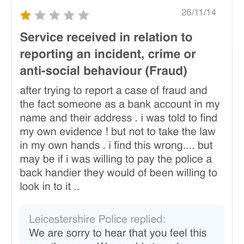 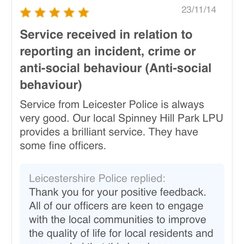 Chief Constable Simon Cole speaking to Capital at the launch