Police have told Capital they've had no reports of damage after an earthquake in the East Midlands last night.

It measured 3.8 and was felt in Rutland, Lincolnshire, Northamptonshire and Leicester, that's where Lee was:

'I was just sitting down watching TV and my cats got scared.

'I looked at the table, I could see my drink vibrating, I said to my partner ''Oh, did you feel that? It felt like an earthquake'', we looked at each other quite puzzled.'

The British Geological Survey, based in Nottingham, got about 200 reports from people who felt the tremor - with the epicentre near Cottesmore.

David and Phil tweeted our newsteam saying they felt and heard just down the road from them in Rutland, the night before there was a smaller quake in Hampshire and there were another two others near Oakham last year. 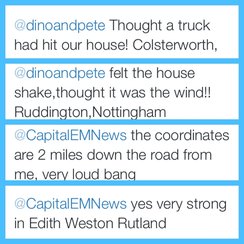