Five Arrests Over Kidnap And Murder In Leicester

Detectives investigating the murder of a jewellery shop worker in Leicester ask for help tracing a shopping trolley.

The body of 74-year-old Ramniklal Jogiya was found near Leicester Airfield on Thursday morning after leaving the shop on Belgrave Road the night before.

Mr Jogiya locked up at around 7.45pm and set off to walk home to his wife and children.

Three men from Leicester, 19, 20 and 23, were arrested on suspicion of kidnap and murder on Saturday (26th), and are in custody.

A further two men, aged 18 and 22, also from Leicester have been arrested and have also been remanded in police custody suspected of the same crimes.

Detective Chief Inspector David Swift-Rollinson has described the attack as savage and heartbreaking:

'Whoever that is seen on CCTV entering the jewelers a short while after Mr Jogiya had locked up and left, is clearly someone I need to identify quickly.

'The fact that they were pulling a shopping trolley and wearing a burkha may have stood out to others in the area, and I'd ask people to cast their minds back and try to remember whether they saw that person. Do you have any information on where the trolley may have been bought from? This might help the enquiry.' 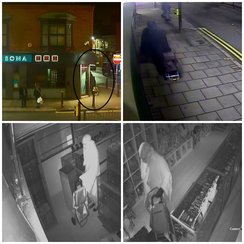 Did you see a car looping Belgrave Road?

DCI Swift-Rollinson goes onto to say:

'To protect my investigation, I'm not willing to say how I believe that person got into the jewellers – but I do want to hear from anyone who was in Belgrave Road between 7.30pm and 8pm last Wednesday evening and who may have seen this individual, seen Mr Jogiya or any vehicles that were being driven suspiciously.

'Did you see any vehicles looping and circling on Belgrave Road and the side streets over and over again? Think back to what you were doing and where you were on Wednesday night.

'I also don't want to you to lose sight of the area where Mr Jogiya's body was found. Were you using the country roads around the airfield on Wednesday night and Thursday morning? Were you in a car, or on foot? Were you cycling in the area, or riding a horse, and see anything that struck you as unusual? Anything at all that was even a little bit out of the ordinary might help us piece together the information.'

Three men, aged 19, 20 and 23, all from Leicester, have been arrested on suspicion of kidnap and murder.