Capital's been told that Derby Arena is the most significant development the city's had in the last 40 years.

When it opens later this year, Derby Arena will have gigs, concerts and other sports too like badmington, basketball, netball and volleyball.

The best cyclists will get up to speeds of 45mph and be able to download their training and competition times using equipment that sits underneath the track.

Capital reporter Laura Barton was one of the first cyclists to ever go on the track, listen to how she got on, below. 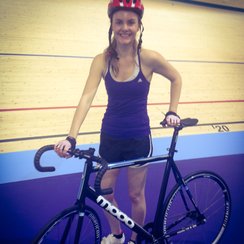