Detectives investigating an armed robbery in a shop in Leicester have released CCTV images of the men they would like to speak to in connection with the incident.

It happened at about 4.25pm on Thursday October 23 when three masked and hooded men entered a shop in Narborough Road, Leicester, near to the junction with Winchester Avenue, and assaulted the owner. The victim suffered minor injuries and was taken to the Leicester Royal Infirmary.

The suspects made off with cash and a number of mobile phones. It is believed the men got into a dark grey BMW and drove away from the city. 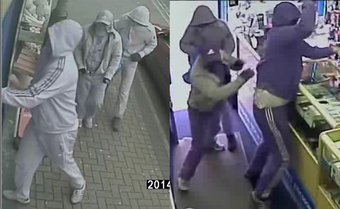 A number of iPhone boxes have since been recovered near the canal on Featherstone Drive, Leicester.

Detective Sergeant 1683 David Speight, who is investigating the incident, said: “We are appealing for anyone who may have seen the suspects acting suspiciously on Narborough Road around the time of the incident or saw them driving off in a dark coloured BMW to please come forward.

”The BMW was later found abandoned on Sybil Road and we are also appealing for witnesses who saw the suspects as they left the car to please get in touch.

“We are also appealing for any witnesses with information about the empty iPhone boxes, or saw any suspicious activity in the area, to please give us a call.”