Six men from Leicester are starting 20 years in prison for taking part in what Leicestershire Police describe as a 'campaign of hate'.

As part of that 'campaign', the men, aged between 19 and 25, persuaded a man to go to an isolated area of the city and attacked him.

Police say that was part of a 'chain of events' that started in July 2013 when a car was vandalised in East Park Road.

After July 2013, one of the men started encouraging people on social media to get violent and ordered weapons from abroad.

The weapons were recovered in police searches.

In August 2013 a man was lured to an isolated area in Oadby and attacked.

The men admitted charges including inciting religious hatred, planning and carrying out assaults and possession of weapons.

'The investigation was very complex and demanded a dedicated team working tirelessly over the last 16 months to achieve the right result.

'This prosecution sends a clear message that we will not tolerate those who plan violence or promote religious or racial hatred.' 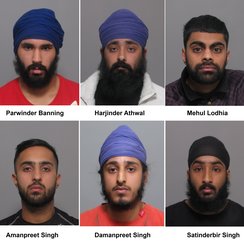