The latest on the hostage situation at a charity in Digbeth.

20.27 @WMPolice The man, who is unconnected to the charity, entered the building around 3pm unarmed.

@WMPolice It is unclear at this stage what his motives for holding the two women were.

@WMPolice Both women are receiving appropriate support after their ordeal.

20.25 The hostage situation is over with no injuries.  Police say a man has been arrested:

@WMPolice A man has been arrested after two women were held hostage at a charity in Digbeth this afternoon.

@WMPolice A cordon is still in place while officers conduct their enquiries.

20.01 Reports a woman has been released from the building.

18.30 Wedding guests at the Spotted Dog pub led out by police to beyond the cordon.

17.51 Police released a statement to Capital:

"Police were called to a charity on Alcester Road shortly after 3pm this afternoon to reports of a man who has locked himself and two members of staff into a private area.

Emergency services are at scene."

17.40 Capital speaks to eye witness David Barnes who says one witness told him there was a man with a gun.  The street has been cordoned off. He lives nearby and told Capital he had been walking home from work when he'd seen armed police. He said: "Someone told me they'd seen a man go into the BITa Pathways mental health charity with a gun."

17.35 Reports on Twitter of a hostage situation in Digbeth on Alcester Road:@DavidwBarnesENG 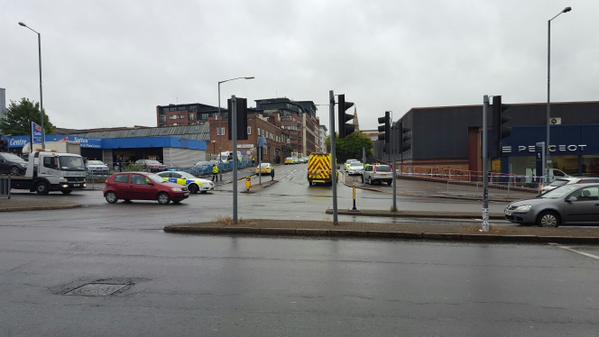