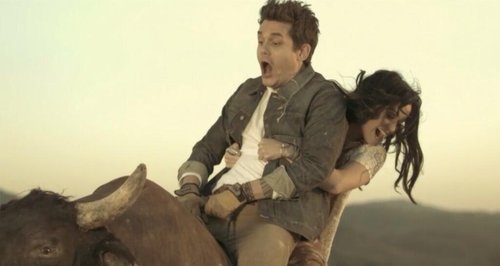 The 'Firework' star is seen riding a bull with her musician boyfriend in the picture.

Katy Perry and John Mayer are gearing up for today's premiere of the 'Who You Love' music video by releasing a funny still from the promo.

The track is taken from John's latest album 'Paradise Valley' and will be unveiled in full during Good Morning America in the US.

The pair recently released the intimate artwork for the track as they posed together in a moody black and white shoot.

The couple will also give their first TV appearance as a couple when they drop by the hit morning show today (17th December).

Meanwhile, Katy was seen on UK TV this past weekend as she performed on the live final of The X Factor.

It came a week after her headline set on night one of Capital's Jingle Bell Ball 2013.