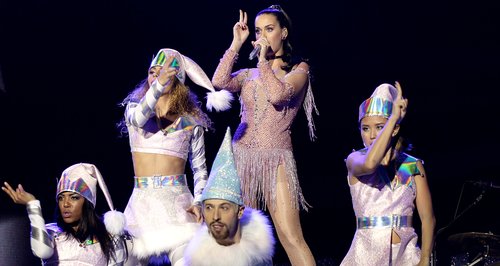 The 'Roar' star gave a show-stopping performance to close out day one of this year's Capital FM event.

Katy Perry wowed 16,000 screaming fans with a hit-filled set to round off the first night of the Capital FM Jingle Bell Ball 2013, performing both old and new songs to round off today's (7th December) show.

The US star kicked off her Jingle Bell Ball set with a performance of her debut single 'I Kissed A Girl', appearing from behind a door to make her entrance to the stage dressed in a tasselled pink dress.

During the performance Katy headed straight out to the front of the O2 Arena stage alongside her guitarist for the final chorus of the song, before heading straight into new 'Prism' song 'Dark Horse'.

The 'Teenage Dream' singer was then joined by a troupe of dancers dressed up as Christmas elves as she launched into her 2012 hit 'Part Of Me', before wrapping up in a furry coat for 'Wide Awake'.

Day one of the Capital FM Jingle Bell Ball 2013 also saw performances from some of the biggest stars of the moment including Tinie Tempah, Olly Murs, Union J and Ellie Goulding.