Wowzer - Katy Perry Is The BIGGEST Selling Digital Artist EVER With 72 MILLION Sales! 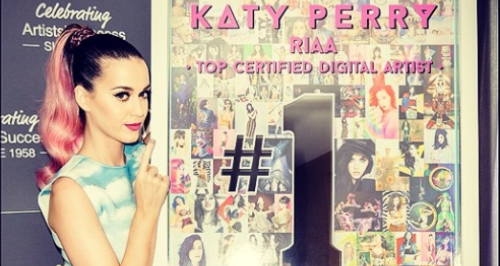 Katy Perry is no stranger to breaking a record or two, but she has been crowned the biggest selling artist EVER with over 72 million sales!

If there is an award Katy Perry hasn’t won, it’s probably not worth winning. The ‘Birthday’ star was given another accolade to add to her collection yesterday, as she was named the RIAA (Recording Industry Association of America) highest selling digital act in the history of Gold and Platinum awards!

No mean feat when Katy has only released THREE albums – she has sold a HUGE total of 72 million digital singles – making her the first artist to go over 70 million. Katy doesn’t have to worry about losing her title anytime soon – she is 20 million sales ahead of the closest competition – Rihanna is on 52 million and Taylor Swift follows close behind on 51 million. The girls are ruling that chart!

Over 72 million served! Thanks for the award RIAA! #THISISHOWWEDO http://t.co/q71EYFIZv7

The chairman of the RIAA said, “Katy Perry is a force to be reckoned with in music. She embodies all that makes a true global superstar: the musical talent, the extraordinary drive and genuine charisma, and an intrinsic connection with her fans."

Katy is currently on the American leg of her spectacular Prismatic World Tour – which features more outfit changes than should be humanly possible in two hours – so we know we can expect more multi-platinum selling albums from her to come!