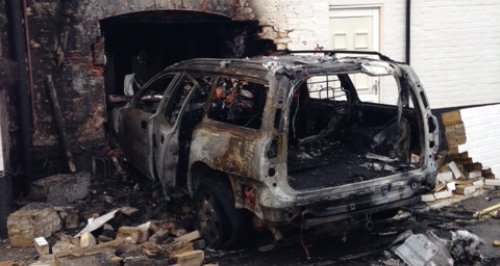 A retired Royal Navy captain remains in hospital after allegedly crashing his car into his sailing club's headquarters at around 70mph and setting it alight.

The 82-year-old, understood to be Clifford Caughey, a former commanding officer of the destroyer HMS Fife, was arrested on suspicion of arson after he drove his Volvo estate through the wall of the Emsworth Sailing Club in Hampshire yesterday morning.

Hampshire Police said the driver remains in hospital and has been bailed until May 28, pending further inquiries.

Witnesses said the driver pulled out of two run-ups before crashing into the clubhouse at around 70mph on a third attempt, the Daily Telegraph said.

He is then said to have got out of the car, set off flares and poured petrol over the vehicle, setting it alight.

Residents were evacuated as firefighters tackled the blaze, which damaged a flat above the club in Bath Road, Emsworth.

The driver was taken to Queen Alexandra Hospital in Portsmouth with non life-threatening injuries and later arrested.

A statement on the club's Facebook page yesterday stated: "We are sad to report that earlier this morning an incident involving a vehicle hitting the clubhouse occurred resulting in some structural damage and a fire.

"All persons are safely away from the area, including those living on-site, and we are now working closely with Hampshire Fire and Rescue to assess the extent of the damage to the clubhouse.

"Please could we appeal to all members to stay away from the club at this time and we will make further announcements once we know what facilities may be available for members in the near future. The club will remain closed for the remainder of the week.''

Mr Caughey, known as John, is understood to be a father of two and a widower after his wife died nine years ago.

He was reportedly in the process of moving house and selling his sailing boat due to ill health and friends and neighbours said he had been "stressed'' in recent weeks, the Telegraph said.

Neighbour Jean Howells, 72, a fellow member of the sailing club, told the newspaper: "I saw John the other day in the garden and he seemed OK but I think he has seemed a bit stressed lately.

"He's in the middle of moving house and all I can think is that it has just got to him - it's stressful moving house anyway and especially if you're on your own.''