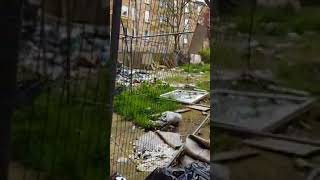 People living in one of Scotland's poorest communities have told Capital the slum conditions have hit rock bottom.

Pictures and videos from Govanhill in Glasgow reveal the new scale of squalor with blocks of flats overrun with rats, cockroaches and bed bugs.

Locals in the area, which is in SNP leader Nicola Sturgeon's constituency, are demanding the First Minister 'gets her act together' and deal with filthy conditions and vermin infestations.

The new shocking footage, which you can see at the top of this page, shows piles of rubbish, rotting food and even human waste.

Residents say they've been asking for help for years and claim Nicola Sturgeon has repeatedly promised she will address the issue.

There are also claims broken and missing banisters are a death trap for children.

Margaret, who lives in the area, says the scenes in the stairwells and back courts of some buildings are stomach-churning.

She said: "The filth...properties should be bulldozed, bins are overflowing, causing rats and mice. I would say the majority of houses in Govanhill are infested.

"Nothing seems to be getting binned. And if they are the bins are overflowing. It is just awful.

A spokesman from Glasgow City Council said: "This is an unacceptable situation. It is clearly the responsibly of the residents to dispose of their rubbish appropriately. We will be looking in to this with the aim of taking further action".

Campaigners are calling for a public meeting between police, the council and Govanhill Housing Association.

A spokesperson for the SNP said: "The First Minister is closely engaged with issues in the area - her constituency office is situated in the heart of Govanhill and she holds regular surgeries and meetings for local people.

"Govanhill, like many areas, faces specific challenges and it is important that all sections of the community are included and involved in addressing those challenges."