The decomposing remains of a young woman have been discovered in Bolton.

Police were called out to the bank of the River Croal near to Manchester Road on Thursday evening. They say the body could have been there for several weeks or even months, and they don't yet know how she died.

Detective Inspector Michael Fraser from Greater Manchester Police said: "When we searched the body, we found a number of items on her that we hope can help identity her. She had a chain secured to her waist band on which were a four inch pink 'mini maglite' style torch, an Aldi shopping trolley token with a black cat on the back, a PNY USB memory stick, a Sandisk 16GB microSD memory card and a Sony Walkman MP3 player. Within the pocket of her trousers was a train ticket and timetable for the Edinburgh to Manchester Airport train line"

"We still do not know how she died but our main priority is to find out who she is. Extensive inquiries have taken place and we are currently looking at missing person files across Greater Manchester and the rest of the UK. However, so far, we have not been able to identify her and more importantly, inform her family that they have sadly lost a loved one"

Police have also released photographs of a necklace the woman was wearing, which you can see below. 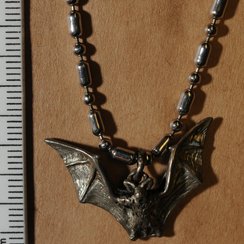