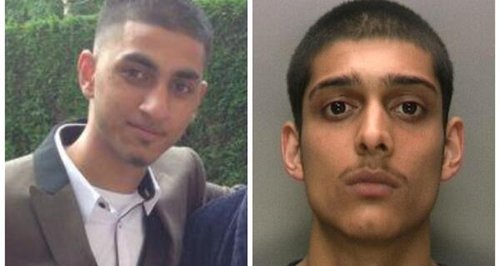 “A shocking waste of two young lives" - that’s how a leading West Midlands Police officer described the knife killing of Birmingham student Azim Azam as a teenager gets life behind bars for stabbing him.

Azim  was en route to his first full day at Bournville College on September 16 last year when he bumped into 17-year-old Azeem Akhtar on the No 2 bus in Moseley.

It’s understood the pair had fallen out months earlier with Akhtar [pictured below] telling friends he lunged at Azim with the kitchen knife in revenge for being “snaked" - a slang term for insulted.

The 16-year-old, from Yardley, died from a single stab wound to the chest and on the 25th February at Birmingham Crown Court Akhtar admitted murder and today given a minimum of 16 years and 3 months behind bars.

Detective Superintendent Mark Payne said the case sent out stark warnings over the danger of carrying knives in public.

He said: “This is a terribly tragic case: Azim had just enrolled on a sports course and was hoping it would pave the way for a PE teaching career. He chose to attend a college away from his home in Billesley, free from distractions and what he saw as negative influences - but whilst travelling to college he was fatally attacked.

“These two teenagers clearly didn’t get on - though quite what caused the spat is unclear - and it came to a head when they saw each other on the bus that fateful morning.

“Had Akhtar not been carrying a knife they may well have had a bit of a dust up and most likely walked away with a few cuts and bruises; who knows, it may well have settled their differences.''

Azim boarded the No 2 bus in Yardley Wood Road, near Swanhurst Lane, at around 8.25am and within moments Akhtar - who was sat at the rear - began hurling abuse and, ominously, was spotted on CCTV discretely pulling on a pair of black gloves.

Fellow passengers told how Akhtar - a frequent bus passenger - shouted “what you doing on my bus…I’m going to deal with you" and “let’s go to town" meaning let’s have a fight.

Azim shrugged off the taunts and minutes later got off at his usual stop at the junction with Wake Green Road.

Witnesses describe how Akhtar, from Glen Rise in Kings Heath, shoved his way past people standing in the aisle to reach Azim and, as he stepped off, stabbed the 16-year-old in the chest.

Azim initially ran off but after a short distance slumped to the ground; a doctor tried reviving him as he lay on the pavement but despite the best efforts of paramedics he later died in hospital.

Akhtar - known amongst associates as ‘Ace’ - phoned a friend on the bus saying “I think I got him but there’s no blood on my weapon" before attending a youth course later that morning.

Det Supt Payne, said: “Just two weeks before the incident Akhtar made threats to a friend that he intended to stab Azim - and during interview other associates told how they suspected him of carrying weapons in the past.

A joint statement issued by West Midlands Police on behalf of Azim’s family told how he left for college “smiling and full of hope" - but was never to return home.

It reads: “We still feel lost and heartbroken over the loss of Azim…a mother should never have to bury her son.

“Nothing will ever bring our boy back but some peace may be found knowing the person who killed him isn’t free to walk the streets carrying a knife, putting further lives at risk. To us this behaviour is so unacceptable.

“An innocent boy’s life was lost whilst on his way to his first day at college. He left that morning smiling and full of hope for his future. We will never forget the way Azim lost his life…we will always miss him and love him."

If you suspect anyone of carrying a knife then call police on the 101 number of speak to the independent charity Crimestoppers anonymously on 0800 555 111.