The Vamps: 12 GIFs That Prove They REALLY Are Pop BFFs 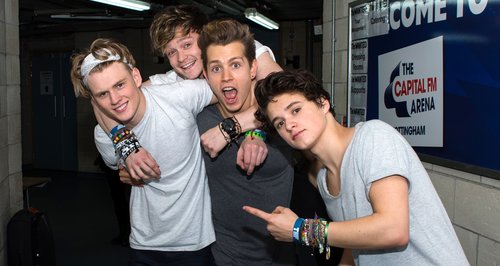 Fresh from the boys' huge charting with 'Last Night' on the BT40, check out these amazing GIFs that show just why these four are each other's best mates.

The Vamps seem to be everywhere at the minute, whether that's supporting The Wanted out on their 'Word Of Mouth' tour or stopping by the Vodafone Big Top 40 to celebrate scoring a top three hit with their new single 'Last Night'.

The 'Can We Dance' four-piece have been taken into the hearts of their fans across the world over the past year, and that's at least in part because you can tell how much Brad, Connor, James and Tristan love each other.

Check out the 12 GIFs below which prove just how strong the friendship of The Vamps truly is.

And there's ALWAYS laughs when these chaps get on a roll together.

What starts as a VERY unusual challenge ends up with a James/Brad sandwich! Bless...

We're pretty sure this isn't the first time these boys have had to ask each other this question...

Too. Cute. To. Handle! James and Brad sharing what looks like breakfast-in-bed, AND a special interview moment. How jealous are you #Vampettes?

The Vamps... ultimate boy band bromance? Poor Brad does looks a little scared of Tristan on the second GIF though... leave his ear alone Evans!

Brad giving James a loving peck on his head is BASICALLY the most adorbs thing we've seen, like... EVER!

The Vamps' new single 'Last Night' is out now with their debut album 'Meet The Vamps' set to follow on 14th April.

> The Vamps Get Fruity In The Capital Studio