Relive ALL the highlights from Brad, Connor, Tristan and James' opening #CapitalJBB set.

The Vamps made sure the Capital Jingle Bell Ball 2014 with Morrisons got off to an INCREDIBLE start tonight (6th December) at London's O2 Arena... playing HIT after HIT to make sure the crowd were partying right from the first song!

Bradley Simpson, Connor Ball, James McVey and Tristan Evans, better known as those cheeky boys from The Vamps, were looking cool as cucumbers when they headed out on stage... with Tristan kicking off the set with an impressive drum solo! Loved it, Tris!

"Jingle Bell Ball! London, SCREAM!" Brad shouted, to kick off the boys' set alongside a stream of confetti and fireworks! #Natch. "All the way to the back, let me see your hands!"

"Are you all ready to have a very good time? A lot of singing and dancing?" Brad asked, with that trademark cheeky smile well and truly making the crowd #SWOON. "That doesn't sound very convincing! I think you could do better, there's 16,000 of you in here!"

Watch the moment the ever-sexy Brad got the crowd AMPED up and ready to go crazy for the #CapitalJBB:

The Vamps opened their set with the anthemic 'Last Night' and, as soon as they sang their first 'oh oh oh oh'... the boys had 16,000 fans in the palm of their hands!

'Wildheart' followed soon after as Brad headed out to the front of the stage to get closer to all those #Vampettes in the audience. That boy has some SERIOUS #swagger going on!

Next up it was time to enjoy the boys' latest single, their cover of 'Oh Cecilia (Breaking My Heart)', and there wasn't a person in that O2 Arena the didn't know the lyrics to THAT chorus!

The Vamps then headed straight into 'Somebody To You', from their debut album 'Meet The Vamps', before wrapping up their Jingle Bell Ball set where it ALL began... with their first ever single 'Can We Dance'!

ALL day The Vamps were tweeting out to show just how excited they were to get out on that stage... we LOVED having you there too, boys!

Just soundchecking at #CapitalJBB http://t.co/wUGmumHO1V @CapitalOfficial - the stage is wicked!

After tonight we will have played 8 shows at the London's O2 Arena, and it's all thanks to you beautiful lot! Xx pic.twitter.com/XuNBRTuwC5

Plus they couldn't resist hanging out with their buddies, and future touring pals, Union J backstage at the O2 Arena! That's what you call a super-group!

The boys made sure to involve ALL the Jingle Bell Ball crowd throughout their hit-filled set, so much so that the fans felt like THEY were on stage with their heroes!

Just had a moment with one of The Vamps... 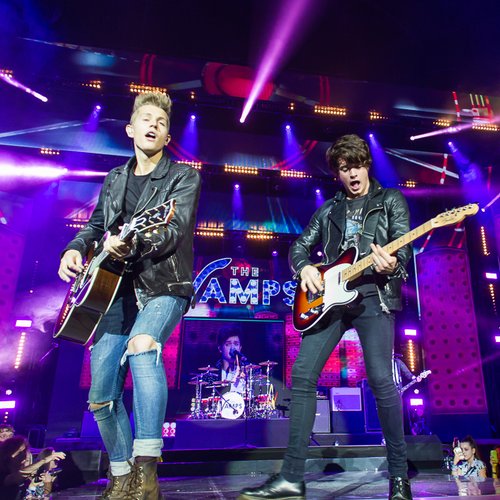 Check out The Vamps' FULL setlist from the Capital Jingle Bell Ball 2014 with Morrisons below: