The 'Turn Up The Music' singer was spotted shooting the promo for the track in Compton this week.

Chris Brown has confirmed that his next single will feature unheard vocals from late singer Aaliyah.

The 'Don't Wake Me Up' star was believed to be filming a tribute video out in Compton this week for the female, but it has now been announced that the promo is for new song 'They Don't Know'.

"I just actually shot a video and I did it and the song is dedicated to all my fans, but it's called 'They Don't Know' but this song features Aaliyah," the R&B star told a press conference for the BET Awards 2013.

"[I got] never-before-heard vocals, all new stuff that's never been heard before," he added.

Check out a picture of Chris on the set of the shoot below: (Picture: X17.online) 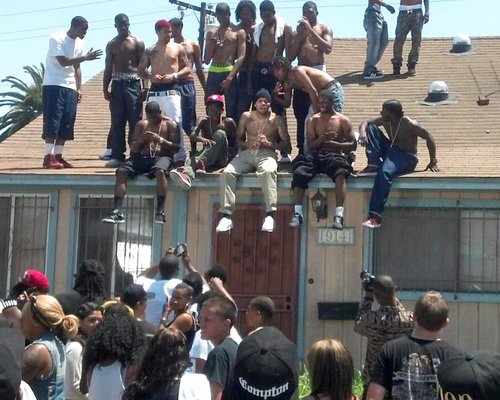 Speaking about the premise of the video, he said he was harking back to the 1960s.

"I shot it in the hood, I went to the 60s. I went to Cedar block," he said. "It's both worlds, it's bringing both words together in the video trying to uplift the poverty side of the community and just showing them where I'm from."

The track will feature on his forthcoming new album 'X' – which also contains a collaboration with ex-girlfriend Rihanna.