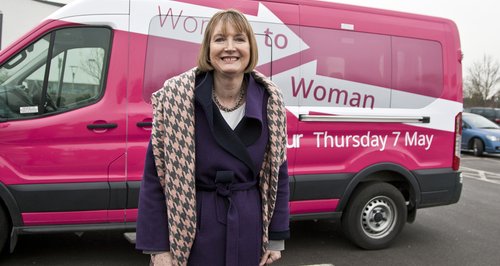 The pink "Woman to woman" bus will be in Bitterne Precinct this afternoon - for the party to discuss their concerns and issues ahead of the General Election on 7 May. In the 2010 election, nine million women - who were eligible to vote - didn't.

Labour says the bus, which contains women from across Labour's team including members of the Shadow Cabinet, is 'touring the country to discuss with women what they want from Government, and highlighting Labour's commitments to women. These include helping them balance work with caring commitments, promoting flexible working, tackling domestic violence and increasing pay transparency. Conversations are being had with women voters at school gates, in workplaces, shopping centres, universities, in town centres and on the doorstep.'

Some critics have described the bus' colour as 'patronising' though.

The bus will be in Bitterne Precinct from 2pm, with listening space also booked at the United Reformed Church hall from 2pm. All are welcome to attend.

"We believe that this election will be a watershed for women in this country.  Women had been making progress in their lives with the backing of the last Labour Government.  But now, with this Tory-led government, that progress is stalling and the clock is being turned back on equality.  "With 'Woman to Woman' we will be discussing with women what they want from government. The campaign will bring politics to the school gate and the shopping centre as well as colleges, offices and factories.