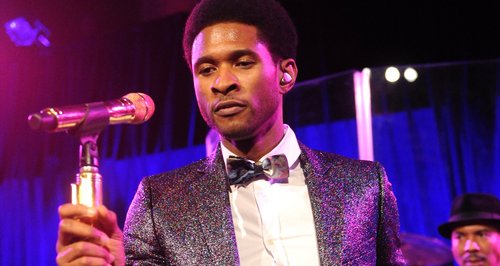 The R&B star has grown his hair long ready to portray iconic boxer Sugar Ray Leonard in Hands Of Stone.

Usher has unveiled a brand new look after growing his hair out to play Sugar Ray Leonard on screen.

The 'Scream' singer has been training "like an athlete" over the past year to portray the iconic boxer in upcoming film Hands Of Stone.

Usher was seen performing on stage at a charity event last night (29th October) where he revealed his new longer hair to fit in with the role.

Check out a picture of Usher showing off his new hair below (Credit: Getty):

The US star performed live in a glittery tuxedo suit at the Gabrielle's Angel Foundation 2013 gala in New York City this week.

The event was also attended by the likes of Rita Ora and Pharrell Williams.

Usher is also working on his eighth studio album at present.