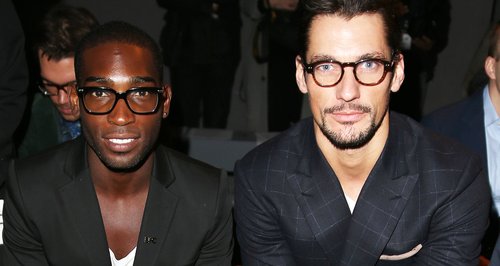 The 'Pass Out' rapper was on hand to mark the launch of the men's fashion event in London this week.

Tinie Tempah helped celebrate the launch of the London Collections: Men fashion event in the UK capital this week.

Tinie and David were pictured embracing each other as they arrived for the catwalk show, and even wore similar looks with both adopting geek-chic style classes and suit jackets over low-cut t-shirts.

David wore a blue checked suit over a white t-shirt for his evening outfit while UK rapper Tinie went a little more casual in a black and white jacket, skinny style jeans and hi-top sneakers.

Earlier in the evening Tinie was spotted taking in rising fashion designer Lou Dalton's show for men's fashion week, while Pixie Lott's boyfriend Oliver Cheshire was also out and about for the event.