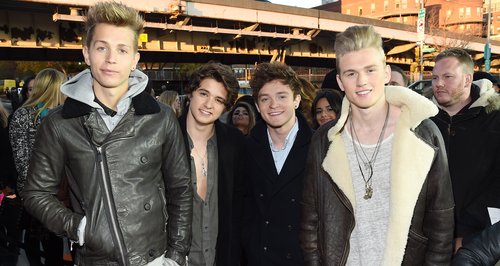 The rumours have been circulating for a while, but is The Vamps’ frontman dating Lauren Jauregui from American girlband Fifth Harmony after they were spotted kissing?

The rumours have been floating around for a while that Brad Simpson from The Vamps may be dating Lauren Jauregui from American girlband Fifth Harmony – and the pair were reportedly caught kissing at the weekend!

HollywoodLife report that the pair were spotted snogging backstage at the HALO Awards where they had performed on stage together, although the pictures have yet to surface…

The pair were also quizzed about their relationship on the red carpet, while Brad didn’t deny the relationship he did say he was dating his fellow bandmate Tristan Evans!

Lauren also deflected the question by saying, “We’re friends. We’re really good friends. Yeah.” But when she was asked if they could be more than friends one day she said, “Maybe!”

The Vamps and Fifth Harmony performed ‘Somebody To You’ together on the show – but are these two making sweet music off-stage too?! As neither of them denied it, we’re going to go for a big YES!