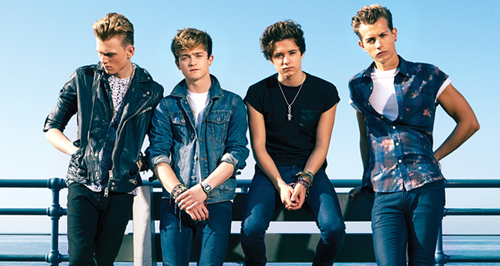 The 'Can We Dance' stars say there's a lot of common ground between the two acts.

The Vamps have promises there is no rivalry between them and fellow boy band 5 Seconds Of Summer, and says they would love to go for a drink with the Australian group.

The 'Last Night' four-piece opened up about 'She Looks So Perfect' band 5SOS this week, and said the two acts have a lot of "common ground" between them.

"We haven't met the 5 Seconds guys but I'm sure we'd get on," Bradley Simpson told the Daily Star this week. "We're both doing the same thing, so it would be good to have a drink.

"There's common ground and the music is good, so there's no rivalry on our part," he promised. "They're doing the pop-punk thing and we've even written songs in that vein because we're fans of that stuff."

The Vamps release 'Last Night' as their new single on 7th April while 5 Seconds Of Summer scored a Vodafone Big Top 40 number one last month with 'She Looks So Perfect.

> 5SOS reveal ALL about their new album.