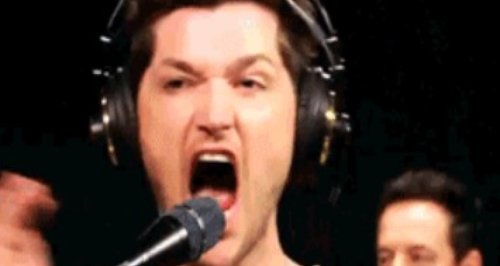 Danny O'Donoghue is a man of many faces. Don't believe us? Well, step this way...

Don't call it a comeback, but The Script are about to totally, like, come back onto the music scene in a BIG way.

Besides playing iTunes Festival later this month, they've also got a brand new album on the way (it's called 'No Sound Without Silence', just FYI), which features their #3 Vodafone Big Top 40 tune 'Superheroes'.

So since there's clearly a LOT more success to come for The Script lads, let's go ahead examine Danny O'Donoghue's best facial expressions in handy GIF form, so we can always know what he's thinking. Which isn't creepy at all...

While Danny thinks he's pulling off the whole bashful type of thing here, what he actually wants is for you to keep throwing some compliments at him. Most likely followed by an "oh stop it, you!". We know your game, Donoghue.

See also: hungry. Don't even try to tell us this isn't the exact face you pull when you see the waiter coming over with your food at a restaurant.

You don't need to be a rocket scientist to decipher Danny's sad face, but what you may not know is that he's not actually singing about a girl, but actually about his hair spray. Stay strong.

REALLY excited. We expect this will be the face Danny pulls when talking about The Script's new album.

OUR FAVOURITE VERSION OF DANNY EVER. Fair warning, if he ever pulls this face when you're within 500 metres of him, you may spontaneously combust.

Aka our favourite GIF ever. This face is a nice mix of doing the Ice Bucket Challenge while inhaling some chilli powder and simultaneously stepping on a Lego. NOT IDEAL.

Have you ever felt so many feels that your face kind of just squishes into itself? Danny has.

Donoghue's got some MOVES, and you've got to love a guy who dances with his face as much as his feet.

If Danny's happy, we're happy. Plus, we're pretty sure his smile generates the electricity for the whole of Ireland, which doesn't hurt really, does it?

And while you're at it, you might as well pre-order their new album 'No Sound Without Silence', which is released on September 15th!