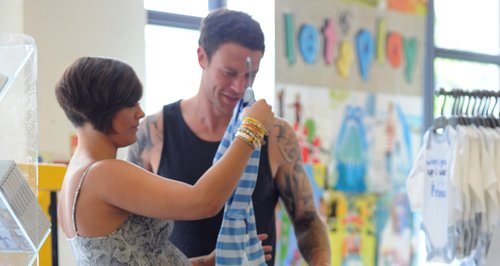 The singer was spotted browsing through Mothercare with her footballing partner.

The Saturdays' Frankie Sandford has been spotted shopping for baby clothes with her fiancé Wayne Bridge.

The singer, who is due to give birth in the autumn, looked stunning in a flowing maxi dress as she browsed the clothes rails in a branch of Mothercare in Surrey.

In July, Frankie confirmed that she is expecting a baby boy later this year. "Having so much fun getting my little Dude's clothes together!" Frankie wrote on Twitter.

The Saturdays are then expected to return this autumn with their brand new studio album.

The Saturdays recently announced details of new single 'Disco Love', which is set to follow on as the girl band's third single this year after the success of both 'Gentleman' and 'What About Us' .