Take That: 11 Performances That Prove How AMAZING The #CapitalJBB Stars Are 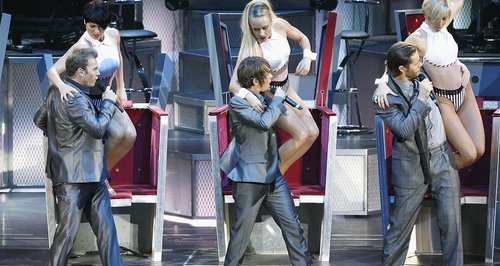 As Gary, Mark and Howard prepare to make their Jingle Bell Ball debut in December, take a look back at some of their most memorable live performances to date.

Take That will be performing at the Capital Jingle Bell Ball 2014 with Morrisons this December, their first time EVER performing at one of our events. And as you can probably tell... we're VERY excited!

To get ready for the 'These Days' band's #CapitalJBB performance we've gathered together nine TRULY incredible live performances from across Take That's lengthy career to show you exactly what you're in for when these three chaps get up on that O2 Arena stage on 6th December.

'The Flood' - Live on The X Factor UK... with Robbie Williams!

'Never Forget' - When Take That reunited for their 'Ultimate' tour in 2006!

'Back For Good' - From Take That's 'Nobody Else' tour

'Patience' - From 'An Audience With Take That'

Which was your FAVOURITE of the Take That performances above? Which hits do you hope the 'These Days' stars crack out for the Jingle Bell Ball 2014 with Morrisons on Saturday 6th December?

And remember... the #CapitalJBB is now completely SOLD OUT! So now your only way in... is to WIN! Click here to find out more!