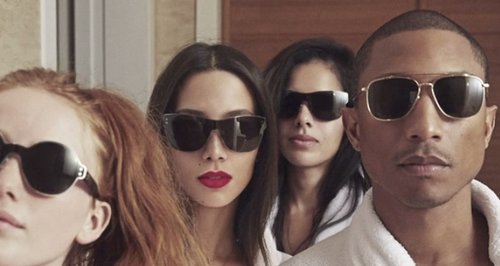 You've heard 'Happy' and now it's time to see what else he's got up his sleeve on the new record.

We're just days away from Pharrell releasing his new album 'G I R L' and he's been so kind as to stream the record all week on iTunes.

Capital has picked out three key tracks which are essential listening following the huge success of 'Happy'.

There's collaborations galore on the record but it's great to see him once again back with Justin Timberlake. It feels like it's 2002 all over again!

He's been instrumental in helping the singer's transition from child-star into global superstar and couldn't resist getting her to join him on the record. It's a typically fun number with plenty of clapping, screams as he sings: "None of them boys know the first thing about your fantasy/ And if they tried, they can not do it just like me." It's playful, cheerful and an early party number to get everyone in the mood.

Ever since 'Like I Love You' - this has been a partnership that just works. Like, no one knows how fish and chips first came together...probably...but you wouldn't ever question the team right? Well, here's another example of why these two are where they are today. It feels like the pair took the song 'Senorita' gave it a tequila and took it salsa dancing for the first time.

As soon as we heard Daft Punk and Pharrell were back working with one another after their previous Grammy winning efforts naturally we were a little giddy. However, there's always that little fear of disappointment that it won't match. Well, you can take that disappointment and stick it...somewhere else. It's a funky mid-tempo track with that unashamed groove that we've come to love. Prepare for your repeat button to be broken.