Pharrell At The iTunes Festival 2014: The Highlights 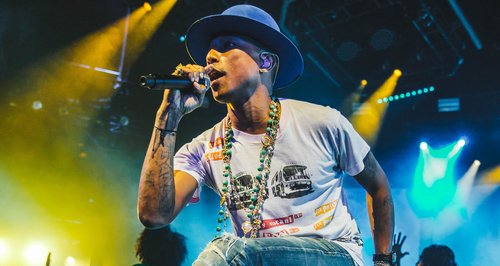 Pharrell Williams turned Camden's Roundhouse into a club as he shut down iTunes Festival with some of his biggest hits from his back catalogue and latest album.

With one of the most downloaded track ever in the UK under his belt with 'Happy', it's fair enough to say Pharrell's iTunes Festival set was highly anticipated, and he did not disappoint!

Performing older hits from his N.E.R.D days such as 'Rockstar' and 'She Wants To Move', as well as newer music 'Sing' and 'Marilyn Monroe' plus covers. Pharrell really did shut down Camden's Roundhouse in London for iTunes Festival last night (Wednesday 10th September)!

From 4.30pm crowds were already beginning to form ahead of the event

We headed backstage to catch up with the man himself (check out his shoes!!)

Crowd favourite 'Marilyn Monroe' got everyone dancing in the Roundhouse!

Rocking a bandanna, Pharrell even took his hat off for some tracks

"And I promise you that I'm gonna remain SO loyal to music, because it has taken me so far" @Pharrell @itunesfestival #itunesfestival

No party is complete without a confetti cannon...

> The 9 BEST Pharrell Williams Anthems You May Have Forgotten About!