Katy Perry's been hitting up Bruno Mars for advice and says her performance will involve lions and sharks!

We're just days away from the biggest sports show in the world, and Katy Perry has been dropping yet more hints about what we can expect from her performance.

Katy has been hitting up fellow Super Bowl performer Bruno Mars for tips ahead of the big event, and she revealed to Billboard that she dropped him a text that read: "Hello, exclusive Super Bowl club member! I was wondering if you are in L.A. at all this month and would have tea with a sister who is about to throw up with nervousness re: [football emoji]. I've heard about your process through our managers, but am wondering if you had more insight on important things like, spray tan the night before or three nights before? JK, or maybe not!"Katy's

Ms Perry might be a seasoned performer but even she is getting nervous at the sheer scale of the event. She admitted, "I'm like, 'I'm f**ing human.' This is the biggest event of my career."

Katy also revealed in a press conference for the event that she is planning to put on the biggest production the Super Bowl has ever seen. She revealed, "I think I'm the only person to ever do a half time show who brings a lion and sharks to the show. It's going to be wild out there. I'm creating three or four different worlds."

"My entrance and exit are spectacular, the costumes are great, the music, I have a lot of songs to cover so there will be some medley of sorts. It's a larger than life show and, there will be costumes, I have 12-and-a-half minutes so I am going to take the opportunity to show a few looks, this is exciting. It is going to be a very colourful performance."

Katy previously revealed that Lenny Kravitz will be joining her on stage but that she will also have another guest performer, a 'throwback' artist. She said, "There is someone, this is true. I have to keep some surprises for Sunday but I'm very, very excited about this guest. I thought long and hard about it. People are not going to expect it."

"It's a throwback of sorts that definitely needed some shine. All I can say is that it will be female fun night but when this person enters the stage, saw will drop and faces will melt. There will be some faces melted when she steps on the stage."

Katy Perry previously said that she plans to bring "strength and empowerment" to the world when she hits that stage to headline the halftime show of the US Super Bowl XLIX on Sunday 1st February.

"I'm all about female empowerment and uplifting people's spirits and people finding their own voice with songs like 'Roar' and 'Firework'," Katy told The AP ahead of her big performance. "So maybe there is no better person for the show. Hopefully I can bring that incredible strength and empowerment to people through the performance."

PLUS… those who are a little faint of heart can relax, because Katy insists she ISN'T out to shock at the Super Bowl and will keep the focus firmly on her music!

"Everything I've done in my career hasn't been blatant this or that. It's always with a wink. It's a soft-serve sexiness," Katy added. "My intention is that everyone talks about the music and nothing else. Sometimes you can't control other people. But I will control myself."

The 'Firework' singer extended an invitation to Hunger Games actor Lenny Kravitz to join her during the set, while chatting on NBC's NFL coverage at the weekend.

And Lenny happily accepted the offer, tweeting Ms. Perry soon after to say he would love to be part of the Super Bowl celebrations. Naturally!

"Lenny will be joining @KatyPerry during the @Pepsi @SuperBowl Halftime Show on February 1st on @SNFonNBC," a message posted on the 'Fly Away' singer's official Twitter account confirmed. 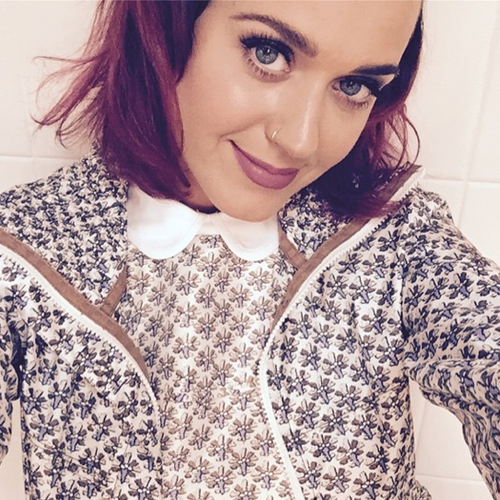 The news comes as no surprise to anyone who's seen previous Super Bowl halftime show performances, which often feature special guests galore as the headline act wows on the stage.

And it’s no small gig - last year’s broadcast was the most-watched TV program in history with a record 115.3 MILLION viewers. No pressure then, K-Pez!

We can’t wait to see what kind of show Katy puts on!

Katy Perry will play the US Super Bowl 2015 on Sunday 1st February at the University Of Phoenix Stadium in Arizona.